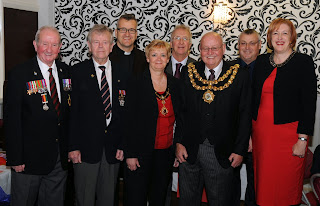 Hosted by Yvonne Fovargue MP, 150 veterans and their guests tucked into a traditional Christmas Dinner.

Cllr Clive Morgan,  a former Welsh Guard and veteran of the 1982 Falklands War, was the MC for the day. The Vicar of St Paul's, Rev Neil Cook was on hand to open the event with prayers followed by the Exhortation led by Mr Mel Lee (Royal British Legion) and Mr Lawrence Powers (Burma Star Assoc).
at 10:21