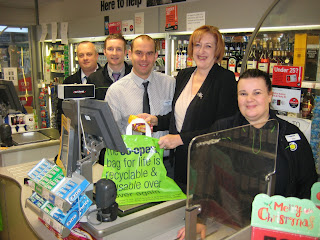 Local MP, Yvonne Fovargue visited the Cooperative Store on Holmes House Ave this morning in support of Respect for Shopworkers Week organised by retail staff union, USDAW and supported by retailers like the Coop.

This week Usdaw leader John Hannett revealed survey results showing that 1 in 6 shopworkers had not reported a violent attack to their manager or the police.

John said, “It is very worrying that 1 in 6 shopworkers who have been physically assaulted did not report the incident to their employer or the police. We are shocked that so many are suffering in silence and I would urge shopworkers to report all incidents, to give us and the employers the chance to sort the problem."

"We are seeking a change in the law to provide for stiffer sentences for those who assault workers serving the public. There is a real need to address the scourge of violence against workers. This proposal would make it clear to potential assailants that attacking shopworkers is totally unacceptable and reassure retail staff that reporting incidents will result in proper punishment for the offender."
at 13:09