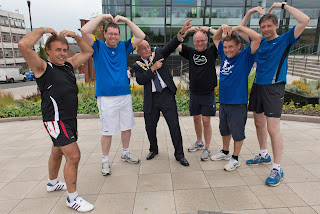 This Sunday, 8th September, Paul Kenny will join over 2600 people in participating in the inaugural Wigan 10K.

Paul will be joined by a group of Councillors' swapping running for political office in favour of running the streets of the town in support of the Mayor's Charity for 2013 - Heartbeat 2.

Paul has run a 10K in the past and has been training for the event for the past few months. He will be joined by fellow Town Hall politicians, Joel Haddley, Jim Moodie and Ged Bretherton. Borough MP's Andy Burnham and Lisa Nandy are also set to take part raising funds for Joining Jack.

Paul is remaining tight-lipped on his finishing time but hopes that local people will support all participants as they set of at 10am from Market St in Wigan Town Centre.
at 14:43